A ‘Story of an Educator’ continued…

I have learned many lessons growing up. One of the most important lesson that I believe makes me a better educator is:

Effort is more important than grades.

As I’ve written before, growing up I was not considered one of the ‘smart’ ones in class.  I had an average IQ but always had to work hard to earn the grades I did.  Being the youngest of six many of my teachers compared me to my smarter older siblings, and some apparently were disappointed. In the late 70s early 80s I survived tracking, or more accurately rose above it. The ‘track’ that I was assigned to for most of my high school years was the ‘low-not going to college’ track. How did I rise above it? I decided that I was going to college and therefore needed to take courses outside my ‘low track’. I believed in myself, wanted to be someone, and therefore pushed myself to prove to all around me that I could indeed pull off courses other than basic diploma ones.

I remember a conversation I had once with a friend on the bus. I can’t remember the exact year, but it was probably later elementary. We were bringing home report cards and my friend was afraid of giving it to her parents because she had one B (all the other grades were As).  I also had my report card and mine had one B, but the other grades were all lower not higher. I wasn’t afraid to take the report card home to my mother and really couldn’t comprehend why her mother would be upset.  I knew that when I got home my mom would look at the report card and ask one question, ‘Did you try your best?’.  That was all that mattered to her, that I did my best.

These experiences cultivated the educator I am today because I believe:

My family believed in me, even though there were times I strayed. (Hey, no one’s perfect.) I was also fortunate to have other people in my life that believed in me. Because they believed in me, I believed in me. And when I thought others didn’t believe in me I was even more stubborn to prove them wrong. That is why I have a strong work ethic; because I believe that success comes from those who work hard for it.

Being an educator is hard work and to do it well you need to believe you can do it and make a difference in your students’ lives.

I have written many posts on climate and the importance of believing in students. LouAnne Johnson has written the inspiring book Teaching Outside the Box: How to Grab your Students by their Brains that I highly recommend.  I wrote the following post about it: Must Read.

Love of Learning  My first post in my ‘Story of an Educator’ series.

This post is dedicated to my dad, gone 7 years today. Because of him I have always put more effort into tasks then sometimes was needed, but it was always worth it. 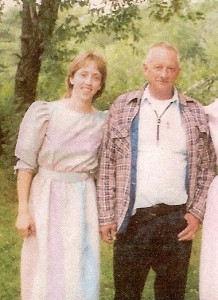 Back To Top
Skip to toolbar